I used to read The Economist every week.

I used to read it, just like the Financial Times, because what is going on in the world matters to me, and I like factual data. But I’ve always been puzzled by the cynical dichotomy that exists between editorials (values) on one side, and facts (reports) on the other side.

It’s rather ironic to read the content of a magazine that years after years, describes with precision and without taboo the progression of extensive and total destruction of humanity and nature, as a direct result of ultra liberalism and it’s destruction of legal and social protections, and then reading the editorials and the front page… 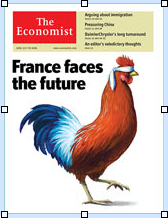 Who’s blind?
What is happening?

Remember the treaty:
The French, despite the tremendous and constant pounding of media in favor of the treaty, never giving any other arguments than “it’s inevitable”, “it’s modern”, “no is the voice of ultra nationalism” etc. In spite of all this, French discussed the actual content of the text, gathered all around the country in public meetings and on the Internet, where you could find lawyers, entrepreneurs, teachers, students, workers etc. in one word: people.
A real debate that neither the political parties nor the media would ever support, and that never actually took place on the front page of the media. So they decided… What the text wanted for them, they didn’t want. This is democracy. The French are probably the most pro European people of Europe! But they simply don’t want their everyday life to be ruled and governed in The City nor in Wall Street.

Today, the CPE:
Anyone who is interested in facts and data knows the CPE isn’t about opening the doors of businesses for the young unemployed giving more flexibility to “try them” or “explore and develop a market”. I had three employees and just laid them off a few months ago because I didn’t have the work for them anymore. I didn’t need the CPE for this, the CDI was fine.

The real question is ideological: it’s about gradually erasing the laws of the “Droit du travail” because the think tanks that have grabbed the seats of the Euro parliament and Commission want all the protections to be dismantled ASAP, in France as in the rest of Europe.

As long as the French were asleep, they didn’t pay attention on what was going on, hence why the CNE (same as CPE but for those over 26) just made his way through the parliament. For some reason (perhaps the Prime Minister was over confident when he said he will discuss and then didn’t) they started looking at what was going on…

The huge mistake of the past governments was simply to draw attention on the little “cuisine” that is being made in the back of the people. As soon as the French wake-up of their media dripped nap, they don’t behave like sheep.

Remember the 2002 Presidential elections:
Jospin didn’t have enough voters simply because the “peuple de gauche” had been discussing and debating on the future of France, and Europe, and had looked into what he and his comrades had actually done in their back. It wasn’t a question of charisma nor the irresponsibility of left wing candidates…

They were looking for a new leader who would speak their ideas. He wasn’t that one. Plus, everybody knew the PS (that still denies and doesn’t amend itself) had betrayed it’s voters and it’s allies by vouching for OMC immoral but profitable agreements, or other agreements such as Lisbon Agreements of 2000 (that gave birth to the CNE, the CPE and other joys of liberalism praised by neocons).

It’s the exact opposite of what some bore are stating all day long: when the French grab a problem, they explore it extensively, they analyze it and they take a matured decision. It’s too bad that they don’t actually do that more often: most of the year, the majority of French are sleeping in front of their TV, lulled by the voice of media lying at the feet of Lagardere, Pinault, Bouygues and Co.

Actually, French like to work, they are very productive (probably because for decades they were quite well brain powered by public education, they could concentrate on their duties without having to fear for their kids, their house, their security and their health). And because they do their work well and are productive, they simply think that work is not all, and that once the work’s done there is a life.

The question here is simple: it’ about the values of a society. It’s about Polis.

The only “chance” to stop the protesters and the takeover by a moribund PS now is that Sarkozy manages to fool the French people by diverting it’s attention on side tracks, or lure the people on another subject. If it works, as the addiction to intellectual laziness remains strong, the government will be able to go on…