I have a plan to save our economies and turn back the investments to down to earth wealth creation and this time with environmental preservation, once for all, for the sake of the next generations. It would cost nothing compared to all the billions stolen by the financial serious managers and acclaimed clever investors of the so called* “free market that will self regulates”… 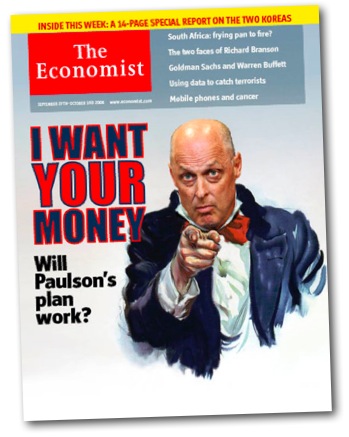 And as a light “go back to school and do your assignments” punishment for each editorial writer of The Econcomist of the last decade, have them to write an essay on: where has the money gone and why financial (unproductive) real economy diverting investments deserve more money then… say… the UN World Food Programme (or just simple SMBs support if that’s too painful for their pen) for example.

Read on their leader:
“I want your money. No government bail-out of the banking system was ever going to be pretty. This one deserves support…”

This is so… how can I say, mmhh… Unexpected!

Damn, how can anyone take these guys for serious. Will they ever learn something?
And we, the “liberals/green/progressives” are the ones that are not serious?

–
* you know the saying: “privatize profits, share losses”, don’t you?