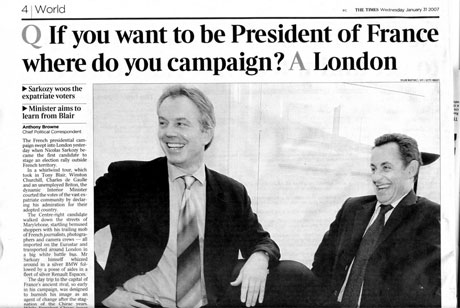 I run an IT specialized business, I work in a very competitive area, where 24/365 availabililty, flexibility*, experience, creativity and quality make the difference. My company’s team varies, depending on the business opportunities I can get.

Though I’m “lost” in the French countryside, in a remote place where there’s no DSL (I had to design myself my own WiFi 7 km wide network) no public transports, fading public services and tough weather conditions, just farms and catholic private primary schools, I work on an international level with partners all around the Euro zone, and my customers are of the international corporations kind.

Paradox: happily, I have no customers in France.

I’m supposed to be the kind of targets that should be lured by Nicolas Sarkozy’s so called entreuprenarial-hard-at-work-winners-takes-it-all-jive, and for which London is kind of a Mecca.

But I beg do differ: More than any other candidates running for presidency, Nicolas Sarkozy is the one that lacks the most of the the innovative sense, the leadership and the nation future’s minded that France is yearning for.

As his rural political supporters, and quite a bunch of small business owners, are moving to Front National (or some to the soporific centered Bayrou), because his party has heavily betrayed them for the last two legislatures, we now see him in contrition saying “I have changed”, with his team of advisors putting in his speeches tearful remembrances to an executed communist resistant, cynical care for working classes afflicted by abroad relocations…

While Nicolas Sarkozy is a parisian high upper class lawyer from a wealthy family, he goes in a muddy farmhouse followed by trains of cameras, to walk in cow pat and declare that men of the rural world (who tend to vote National Front’s candidate Le Pen) are fed-up of the young escheated men of suburbs that burn cars and busses. He’s scraping out the FN vote by teasing class confrontation in France.

While his grass roots are soaking in a purulent aversion for state employees, he’s even now lulling public teachers: those who probably have suffered the most of the hatred and scorn speeches, skillfully distilled against them over the last decades by his partisans and supporters…

These teachers, who are at the front, dealing with the consequences of massive brainwashing pounded by his friend’s controlled medias, are being accused from all parts to be responsible of the rubbish of a society that has endorsed a failed ideology that promotes sick media contents and intellectual poverty.

While the country can blow more than 50 millions of euros daily on gambling, while there have never been so many SUVs on the perfectly flat roads of city centers, these teachers, public hospital employees and state employees are being accused of ruining France by his supporters and think tankers.

For years the man has carried the flaming torch of his friends’ powerful families that are now asked to be discreet and avoid flashing cameras because he is, first and all, a man of entrism:

There’s a quantum leap between the pragmatic way (yet no more socially minded) of doing business in the Anglo-saxon world, and the free market the French way: the trend of french pro marketeers is to divert the immense public spending into a captive market controlled by a group of powerful families. These families are also the ones that control most of the medias in France and, last but not least for entrepreneurs alike, their companies are setting the rules for contractors.

A huge part of the small businesses in the country depend on the work that these companies consent to contract-out, and this powerfully controlled web on the french economy dates from the obscure period where the financial backing of political parties resembled the african french marigot.

To picture this, look at it that way: business owners work hard to create value, say, half this value is taken away by taxes that are supposed to go to public health, schools and other state controlled redistribution, but actually ends in these families companies through captive public contracts.

The other half of the revenues is consumed in products and services that are produced, marketed and distributed by the same families that also own the radios, the newspapers and the TV networks.

Top this with the fact that, as ministre de l’intérieur, he has demonstrated and vouched for state violence, state controlled pressure and repression as an acceptable means to prevent middle and low class uprising.

What do you call this?

*Which is BTW not the same as “fléxibilité” but guess what, my 11 year daughter’s english is probably better than his…